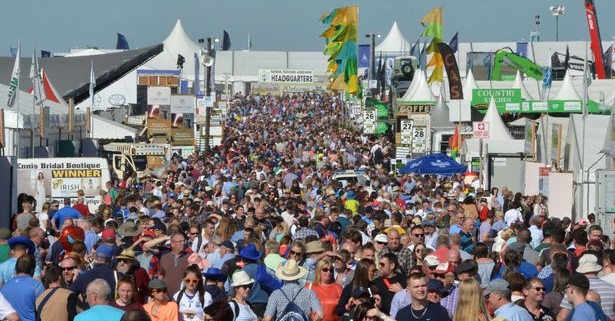 The 2019 National Ploughing Championships kicks off today with huge crowds expected to attend.

This year’s three-day event in Ballintrane, Fenagh, Co Carlow is set to be bigger than any other and the dry weather will attract more than 300,000 people.

More than 302 ploughmen will descend upon Carlow to compete in the competition, while those attending from around the world can browse 1,700 exhibitor stalls.

Assistant Managing Director of the championships, Anna Marie McHugh, said: “It’s actually one of the first times that we have had such a physically beautiful site. This year we have the biggest trade field we’ve ever had. We’ve approximately 160 acres – it’s three fields. The enterprise arena has more countries coming in than they’ve ever had before so that is great for exhibitors.”

Those attending the Ploughing will have plenty to see across the three days ranging from multi-million demos of farming machinery to fashion shows.

The Ploughing Championships is set to have an estimated €25million economic impact as thousands of people from all over the world travel to the event.

DMS Governance creates 50 new roles with the opening of its new location in...

You can find out more about which cookies we are using or switch them off in settings.

This website uses cookies so that we can provide you with the best user experience possible. Cookie information is stored in your browser and performs functions such as recognising you when you return to our website and helping our team to understand which sections of the website you find most interesting and useful.

Strictly Necessary Cookie should be enabled at all times so that we can save your preferences for cookie settings.

If you disable this cookie, we will not be able to save your preferences. This means that every time you visit this website you will need to enable or disable cookies again.

This website uses Google Analytics to collect anonymous information such as the number of visitors to the site, and the most popular pages.

Please enable Strictly Necessary Cookies first so that we can save your preferences!