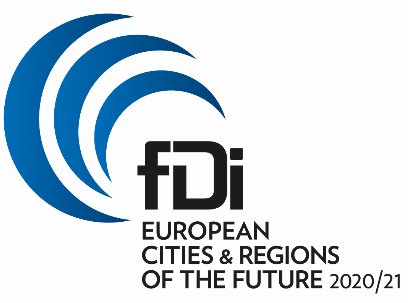 The Ireland South East Development Office announced today that region has received a number of high profile awards in the latest fDi European Cities and Regions of the future rankings. fDi magazine – a publication from the Financial Times –  released its annual rankings for 2020/21 which showed Ireland South East is now recognised as a region with a clear fDi strategy, of economic potential, and a region for the future.

Frank O’Regan, chair of the Ireland South East Development Office commented: “We are the fastest growing region in the fastest growing economy in Europe. We are also Ireland’s best value region, all within 1 hour of Dublin and offering a quality of life with beaches, mountains and top class food and culture which is hard to find elsewhere. We are home to three Institutes of Technology which are working hand in glove with industry. But I suppose the key thing about this region is its people – who are open and innovative and who work to make life as easy as possible for any prospective investor”.

No.1 for Regional FDI Strategy

Ireland South East was crowned the winner in the Regions of the Future rankings for FDI strategy for regions of under 1.5 million people. The Financial Times analysts highlighted the collaborative approach taken by the five local authorities of the South East and the focus on creating organised economic clusters and developing innovation and R&D supports to enhance them as being key drivers to improving the region’s business environment, talent and infrastructure.

Region of Economic Potential and Region of the Future

In the category of regions of under 1.5 million people, Ireland South East was awarded the 8th position for economic potential, and placed in the top 10 for Regions of the Future. This was based on a range of indicators such as growth rates, FDI flows and innovation. Ireland South East’s continued growth in job creation and labour force combined with FDI performance among its strong economic clusters – Life Sciences, ICT, Financial Services – mark it out as a region of the future with great economic potential.

Waterford is a Regional City of the Future

In further good news for the region Waterford was ranked as 8th Overall in the Micro European Cities of the Future category as well as 5th for Economic Potential and 7th for FDI strategy.

Every two years, fDi Magazine, publishes its ranking of the European cities and Regions of the Future. To create a shortlist the fDi Intelligence division of the Financial Times collects data for 505 locations (319 cities, 148 regions and 38 LEPs), under five categories: Economic Potential, Human Capital and Lifestyle, Cost Effectiveness, Connectivity and Business Friendliness.

Why invest in Ireland South East?