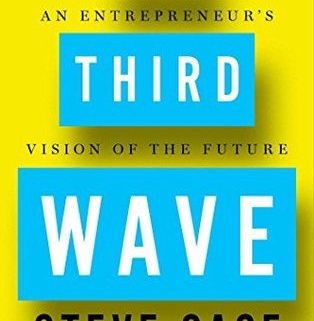 Ron Immink takes a look at the book: “The Third Wave: An Entrepreneur’s Vision of the Future” by Steve Case.

The Ireland South East region is currently being used as a testbed for an innovative European funded study into intrapreneurship. The study will examine the entrepreneurial behaviour of employees and the development of new ventures within an organisation. As part of this project we will share interesting blog posts from the experts involved in the study.

In the first part of this series Ron Immink takes a look at the book: “The Third Wave: An Entrepreneur’s Vision of the Future” by Steve Case. The book discusses the need for large companies to embrace entrepreneurs and the entrepreneurial mindset as the key to surviving. Case argues that entrepreneurs will vastly transform major “real world” sectors such as health, education, transportation, energy, and food–and in the process change the way we live our daily lives.

Book Review: “The Third Wave: An Entrepreneur’s Vision of the Future” by Steve Case

Steve Case is the founder of AOL and was the chair of Time Warner. A guy who has been there, done that, fought the fight with Microsoft and Apple and created his own platform.

A while ago I read “The internet is not the answer”. A dark book (or anti-book), that describes some of the negative aspects of the Internet. Warns about the winners taking it all. A darker version of “From Gutenberg to Zuckerberg”

The printing press first “liberated” information until it became a gatekeeper (the Bible as an example). The same is now happening on the Internet. Some very powerful platforms are becoming the gatekeepers. Amazon, Apple, Google, Facebook and Watson to name the most obvious ones.

Barriers to entry are going up

That is not a good thing. Not only from an information supply and media perspective (read “Filter bubble”), but also from a start-up perspective. For a while, the internet liberated the distribution channels, now what is starting to change. Barriers to entry are going up again. Making it more difficult for entrepreneurs to scale and succeed.

The author identified a number of opportunities such as health, education, food and the internet of things in general. Solving real problems. Profit plus purpose. In his view, the surf is up. A wave of exciting business opportunities. But with IOT everything is connected, which means you will meet one or more of the big gatekeepers on the way.

The rise of the Internet of Everything, where everything we do will be enabled by an Internet connection, much in the way it’s already enabled by electricity. This process will lead to the transformation of some of the industries that are vital to our daily lives, which will make the barriers to success higher, and the need to form partnerships much more central, as a way of building credibility, opening doors, and getting past industry gatekeepers.

He identifies 3Ps. Partnership, policy, and perseverance. The interesting one in this is policy. You know that start-ups are hard work and that perseverance is a key success factor. You know that as a start-up partnership and distribution are essentials to create credibility and create routes to market.

Government as a client

Policy as a factor. In IOT, things need to be synched. Customers will need to be protected. Which means that the government will get involved. As an entrepreneur, you must have a fluent grasp of the policy issues you will encounter.

The third wave will create disruption. A report from Reuters noted that “the top executive of many a corporate giant must feel like the fictional character Gulliver, waking up to find themselves under attack from modern-day Lilliputians, small start-up companies which overwhelm their established rivals with new technologies. Perhaps that’s why business leaders said, in a survey by the Global Centre for Digital Business Transformation, that nearly half of the top-ranked companies in their industries will be gone by 2020.

Entrepreneurship is the way to go. “It isn’t that entrepreneurs are smarter than companies, it’s that they are trying more crazy ideas, taking more shots on goal. Frequently, large companies have a decision-making process where many people have the power to stop an idea, but very few have the authority to green-light one. For example, the idea of a self-driving vehicle was not first born in the tech sector; it was born in the agricultural sector.

Incumbents often fail because they underestimate the speed at which the future is approaching. People at startups think about the future every day. There is a mythology in the tech world that the best talent gravitates toward startups. But many of the smartest, most creative, work for the large corporations. Siemens employs 90,000 research scientists. Monsanto employs some of the sharpest agriculture technology minds on the planet. GE’s research labs are filled with brilliant PhDs. The raw talent is there; the question is how it is organised and whether it can be mobilised to innovate. The challenge for Fortune 500 CEOs is to leverage scale advantages while injecting a tempo of speed and a culture of risk. The internal clock speed Peter Hinssen refers to in “The network always wins”. It is time to develop a perpetual sense of paranoia and curiosity.

At Facebook, engineers are encouraged to “move fast and break things,” not because Mark Zuckerberg is reckless, but because he understands that innovators need the space in which to take risks.

Sign up to our project newsletter to hear more about intrapreneurship