Great progress is being made on the Brewhouse at the Abbey Quarter, Kilkenny. New glazing is being fitted around the Brewhouse which is in keeping with the Bauhaus period style of architecture in which the Brewhouse took its influence from originally and was an integral part of the redesign.

Jason Clerkin, Abbey Quarter CEO commented “We are really happy with how this is turning out and when the off white render is added it will tie it all together.”

The glazing to main atrium has also started to be installed which gives sense of the scale of the glazed wall as it extends to all levels. This feature looks great both inside and out. 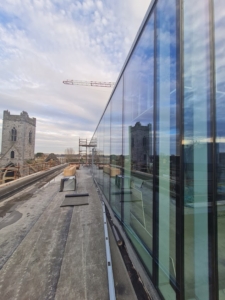 Works have also commenced on Horse Barrack Lane with the hoarding being removed to open up the front of the building to allow public realm works to commence. It is clear that the scale of this will be impressive as it will also link through to the new Brewhouse Square between Units 3 and 4.

The vision for the Abbey Quarter is to create a vibrant new urban quarter in the heart of the medieval city. The new quarter will provide an exceptional business location for companies seeking outstanding global connectivity and the capacity to attract high calibre talent. It is located on the site of the former Smithwick’s Brewery on the banks of the River Nore.

This site was originally settled in the 13th century by Franciscan monks who established St. Francis Abbey. The monks brewed ales here long before John Smithwick established his brewery in the early 1700s and it continued to operate as a brewery for 300 years until it was closed by its owner Diageo in 2013. The remains of the choir and bell tower of St. Francis Abbey still stand on the site today as a reminder of its rich history.

The Abbey Quarter will be a seamless complement to the medieval city and an inclusive place for an inter-generational community to work, live and play. A new 3 acre public park will be laid out with the 800 year old Abbey as its centrepiece.